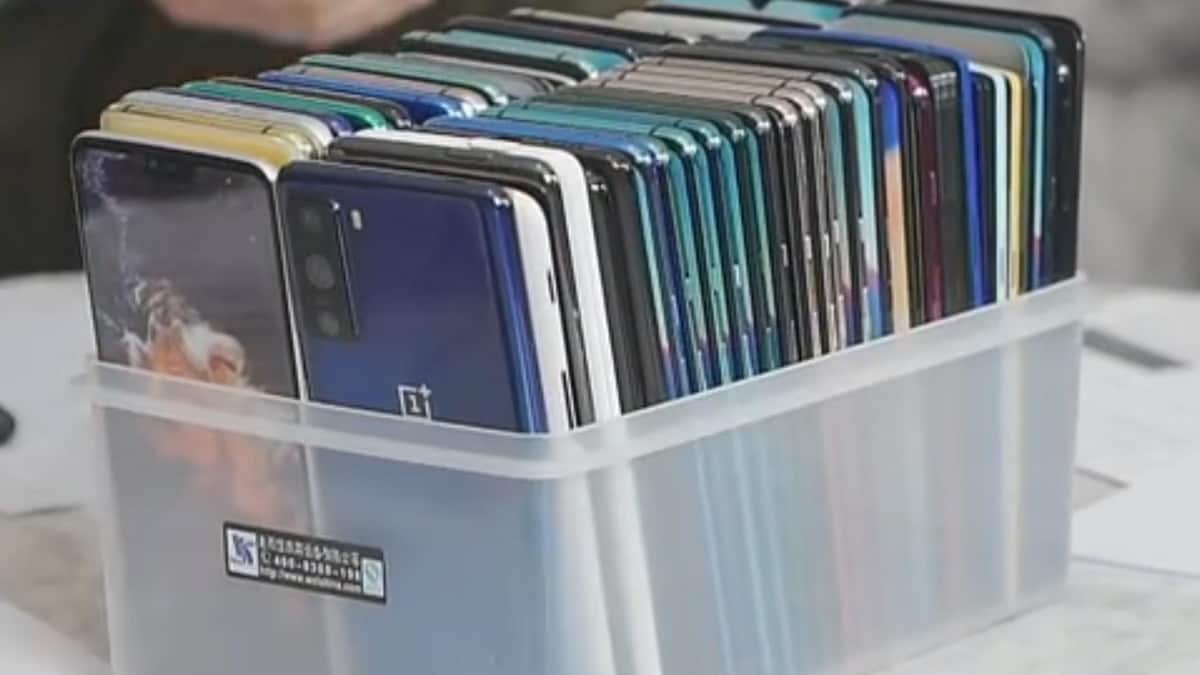 OnePlus has been following a biannual refresh cycle for a while, but last year, it unveiled four models – with ‘Pro’ models alongside ‘T’ models. This year, a ‘Lite’ model, expected to be called the OnePlus 8 Lite. Last month, we saw some leak-based CAD renders of the phone and now, some new live shots have surfaced which seemingly show the front and back of a OnePlus 8 Lite dummy unit. The photos show the rear of the phone having a similar design to the render from last month, which has led many to believe that it could be the OnePlus 8 Lite, however, it features triple rear cameras instead of dual rear cameras. We don’t have any more concrete details yet though, about what the specifications would be like as we’re still many months away from its launch.

The new set of images come via Slashleaks, which shows a whole bunch of phones stacked in two rows in a plastic container. The interesting bit are the two phones in the front of the row, where one of them clearly bears a OnePlus logo on the back and three rear cameras. These phones could be dummy models or concepts which were created in the designing process for the company’s upcoming lineup. The blue colours phone with the OnePlus logo is reportedly said to be OnePlus 8 Lite, since the triple camera modules looks very similar to the render we saw from Onleaks last month, though that render had shown dual rear cameras.

The photos have been digitally zoomed in so the clarity is not very good, but we can still make out some details of the back. There seem to be some changes compared to the render, like the flash module is placed on the right of the camera module on the dummy unit. The phone on the left in the picture, which shows the screen and a wide notch, is possibly an older OnePlus device as the OnePlus 8 Lite is rumoured to have a hole-punch display and the company moved away from that style of notch with the OnePlus 6T. Onleaks has since modified its render to include a triple rear camera setup.

As for specifications, this is anyone’s guess. Some say that the OnePlus 8 Lite could be powered by MediaTek’s Dimensity 1000 chipset, which is its flagship 5G SoC announced just last month. However, considering this is a ‘lite’ model of the trio, it’s possible that OnePlus might go with Qualcomm’s Snapdragon 765 or Snapdragon 765G SoC, which also has an integrated 5G modem. The dummy model didn’t have any cutout for a fingerprint sensor, which means we could expect an in-display sensor under the AMOLED panel. The phone is also expected to have a 20:9 aspect ratio display, a full-HD+ resolution, and 90Hz refresh rate.

Coming to the cameras, the primary one would most likely be a 48 or 64-megapixel sensor, followed by a wide-angle camera and perhaps a sensor for depth calculation. OnePlus could ditch the telephoto lens on the ‘Lite’ model to keep costs down. Reports also suggest that the phone could finally come with an official IP53 rating for water resistance and pack in a 4,000 man battery with 30W fast charging. Pricing is said to be in the range of $431 (roughly Rs. 30,700) to $473 (roughly Rs. 33,700), which means if true, the OnePlus 8 Lite would come in at the price of last year’s OnePlus 7 (Review).

Besides this, OnePlus is also expected to launch the standard phone and a ‘Pro’ model, to follow-up last year’s launches. The OnePlus 8 Pro was allegedly spotted recently on the Ministry of Industry and Information Technology (MIIT) website in China, suggesting support for dual-mode 5G connectivity. We’ve also seen design diagrams of the phone leak in the past, hinting at the phone’s final design.

Photo Credit: Slashleaks OnePlus 8 Lite is rumoured to have the MediaTek Dimensity 1000 SoC HIGHLIGHTS The photo shows a dummy model of the alleged OnePlus 8 Lite The rear...