When India Was Obsessed With Another Moon Landing

For a 12-year-old schoolboy, Armstrong’s moonwalk couldn’t have been worse timed. The summer vacation had given over in the middle of July and for desis, the Eagle landed- given the time difference – on a Monday. That wouldn’t have been so bad if Armstrong hadn’t taken hours – bloody hours – to undo the hatch and climb down the ladder. The Lunar Module (it was capitalized in our heads) landed at a quarter to two in the morning. That wasn’t so bad because in my brother’s head and mine, that wasn’t the main event and we could sleep through it. The main event was Man on Moon: Armstrong’s boot meeting lunar surface. 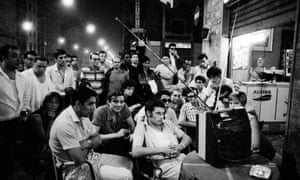 Some crazed scheduler decided this would happen a little over six-and-a-half hours after Eagle touched down. In my world this meant that by the time we left home to drag ourselves off to the school bus-stop on Pandara Road, it still hadn’t happened. Instead of listening to the great descent on a Philip’s radio the size of a small trunk, connected to a reliable rooftop aerial, we would have to tune in to this world historical event on a dinky transistor radio which, even in optimal conditions, produced mostly static. Also it was illegal; St. Xavier’s School didn’t allow radios in school premises and officious bus monitors had been known to argue that school buses were, in effect, school premises.

Walking to the bus stop, Sudhakar and I were paralysed by the anxiety that we wouldn’t be able to listen in, live, to the greatest event in our lives. There were apparently half a billion people who watched the moon landing happen but television had barely arrived in India and we weren’t part of that communion.

Thanks to my obsessed older brother, I had been tracking this journey to the moon for the better part of a year. From cutting and pasting colour photos of Pataudi, Bedi and Chandrasekhar and articles about them on to sheets of chart paper and then filing them in shoe-lace binders, we had transitioned seamlessly into glueing profiles of Armstrong, Aldrin and Collins next to carefully cut out photos of the space craft. Cutting out the Eagle (which looked like a modernist metal frog) was especially hard because its landing legs were so thin that a single bad snip with the too-large tailor scissors we had meant a legless lunar module and a hunt for another photo. I’m not sure why we felt we were improving these pictures and articles by embalming them in albums but I suspect that in the information-scarce world of the 1960s, we thought we were creating a handy private archive.

It helped that the moon landing was preceded by the greatest PR campaign in the history of humanity. The USIS (United States Information Service), which ran a library near Mandi House, had whole shelves of expensively illustrated books on the American space programme. It was a Cold War library and once Kennedy made the Space Race the centre-piece of this conflict, no expense was spared. Every month, a copy of SPAN, the US Embassy’s propaganda magazine, slid through the front door, free. From lengthy photo features on the PL 480 programme, the editors switched in 1969 to saturation coverage of the race to the moon. Since both my parents were civil servants of sorts, we got two copies, one to cut and one to keep. SPAN was a symbol of how loaded the US was: every page was thick, glossy, photo-quality paper, crammed with colour photographs. And it was free.

So by the time July 21 rolled round, we knew in technicolor detail that this was a world-historical event. And because we were in on the run-up to the take-off, we adopted this great partisan Cold War adventure as our own. This didn’t mean that we were thick enough to think we were all Americans now. No, we knew we weren’t American children. We didn’t have paper rounds, and we definitely couldn’t turn packets of seeds into Daisy air rifles. But we could make believe that when the astronauts declared they came in peace for all Mankind, that meant us too. So much so that when I read that the Soviet Union had launched Luna 15, an unmanned mission to the moon, designed to show up the Americans by bringing moon rock home before Apollo 11 could, I was outraged.

That was a a propaganda coup in India, circa 1969. With Nixon in the White House, India was closer to the Soviet Union than it was to the US. Thanks to the ’65 war with Pakistan, schoolboys knew more about military hardware than they should have and I knew, age 12, that India’s air force had chosen the MIG 21 over its Western competitors. Before Apollo, we knew nothing about the American space programme, but a great deal about the Soviet Union’s. Every middle class schoolkid could say and spell Yuri Gagarin and Valentina Tereshkova, the first man and woman in space. No one had ever heard of Alan Shepherd, the first American in space. The space race was the most unforgiving, winner-take-all sport of them all: no one remembered the guys who came second.

Till Apollo, space for us was all Sputniks and cosmonauts. Besides, I thought the Soviet space programme was superior because its cosmonauts made land fall instead of splashing into the sea, which seemed to be, quite literally, a harder thing to do.