MCHENRY, Ill. –  Skeleton in hand, retired biology teacher Jeannie Scown delivered a message to her Republican congressman at his office northwest of Chicago.

In a nod to House Republicans’ recent vote to gut the health care law, Scown had no intention of sparing four-term Rep. Randy Hultgren with subtlety.

“He has to understand that sick people vote, too,” Scown said, “and we are going to go get them and take them to the polls if they can’t get there themselves, because we are tired of being used.”

Democrats see in these displays evidence of the enthusiasm necessary for them to break the GOP’s monopoly control of Washington in next year’s midterm elections.

Republicans in some districts faced a backlash at raucous town halls over their votes for the House health care bill.

There were plenty of complaints about a provision that would allow insurers to charge seriously ill people higher rates if they let their coverage lapse. Other lawmakers avoided holding forums.

Trump added to the tumult by dismissing Comey, raising questions about whether the president was trying to scuttle an FBI investigation into possible collusion between the Trump campaign and Russia. 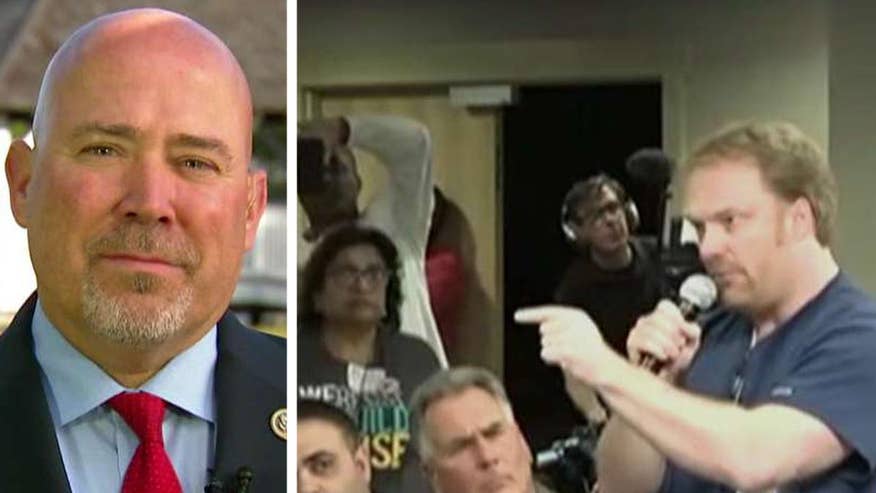 “He did this as Comey wanted to get closer and closer,” said Sam Weissbard of Westfield, New Jersey. A dentist who practices in Manhattan, Weissbard said he has no ill-will against his five-term congressman, Republican Leonard Lance, who voted against the health bill. Nonetheless, Weissbard will oppose Lance to send a message to the White House.

In Illinois, Scown said Trump’s move shows why “the whole administration scares many of us.” Whatever “displeases him,” she said, “he gets rid of.”

Trump maintains a hold on his core supporters — about 40 percent according to many polls — but the intensity of voters like Scown and Weissbard offer encouragement for Democrats.

The party needs to flip 24 seats to seize control of the House. Democrats’ top targets are some two dozen GOP-held seats around the country in places such as Arizona, Florida, California and Colorado where Democrat Hillary Clinton beat Trump. Of the 217 Republicans who backed the bill, 14 come from districts carried by Clinton.

The first political tests are just weeks away.

In Montana, folk singer-turned-politician Rob Quist is trying to win his state’s at-large House seat in a May 25 special election.

In Georgia, Democrat Jon Ossoff has raised more than $10 million ahead of a June special election in a suburban Atlanta district last represented by Trump’s health secretary, Tom Price. But party operatives and their aligned groups are primed for an offensive even if Ossoff and Quist fall short.

Outside groups have started television and digital ads against vulnerable Republicans who voted for the bill, and liberal grassroots groups are organizing “Adopt-A-District” town halls that send Democratic House members into Republican districts where the local representative has no scheduled open forums.

One of the first sessions was Friday in Kenosha, Wisconsin, in House Speaker Paul Ryan’s district. With Ryan elsewhere in Wisconsin — public events but not open town halls — his neighboring Democratic colleague, Mark Pocan, greeted the speaker’s constituents at a union hall.

“Paul is the person who essentially drafted this health care bill,” Pocan said, ahead of the gathering. “We need to know that his constituents have every tool possible to try to influence him in a different direction.”

Defending himself, Ryan told reporters on Friday: “It’s not that I’m not doing town halls. I’m getting around to see constituents all the time. I’m doing office hours, I’m doing telephone town halls, I’m doing business interviews. I’m doing it in a way so constituents don’t go into a harassing environment.”

Vicky Van Wright, 69, who had never attended a town hall, said she was worried about Trump leading the U.S. “back to a darker time in our history,” but identified the health care bill as her driving concern. She argued it could threaten Medicaid insurance programs for her 35-year-old son with Down’s syndrome.

Hultgren said in a statement that the protesters who’ve gathered outside his office are “getting overly dramatic” about the impact of the plan.

In 15-term Rep. Dana Rohrabacher’s nearby district, Patricia Hilaiel-Miller is the kind of voter at-risk Republicans must win over, despite any misgivings over Trump or health care.

A registered Democrat, Hilaiel-Miller, praises Rohrabcher as “proactive.” But the 60-year-old said she and her husband, who is self-employed, benefit from the law and she’s unsure about potential changes.

“The whole thing is a joke,” she said. “I’m just going to move to France.”

‘The Kardashian lifestyle is why you can’t buy a house’: millionaire developer
Education secretary has long history of financing politics